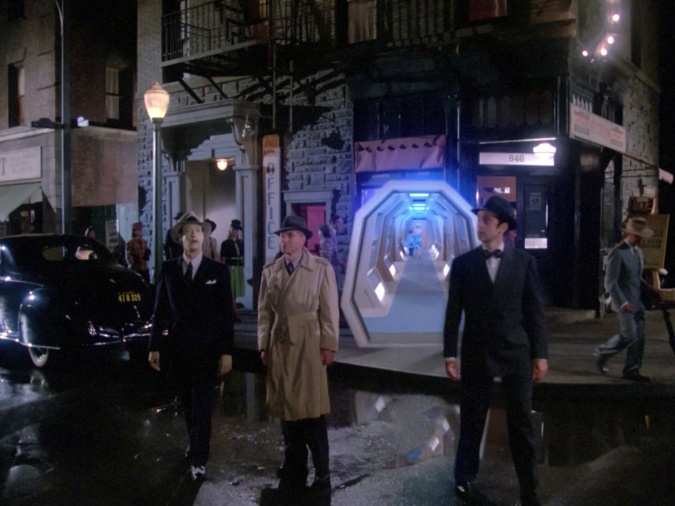 Because when you’re an interplanetary starship captain, all you really want is to be a city-streets private eye.

I often say I grew up in museums, which is true.  I also grew up on Star Trek and PBS.  This means I have a lot of awe for sci-fi technology and a burning desire to know if we can get there, and if so, how it all works. I’ve accepted that beaming to a ship in orbit’s not going to happen in my lifetime, but every once in a while I hear about something cool that makes it feel like we’re one step closer to the United Federation of Planets. 3D printing food, for instance, is not yet quite so cool as a replicator, unless everything from the replicator tastes like mashed potatoes. (I think there was an episode where that happened, actually…) 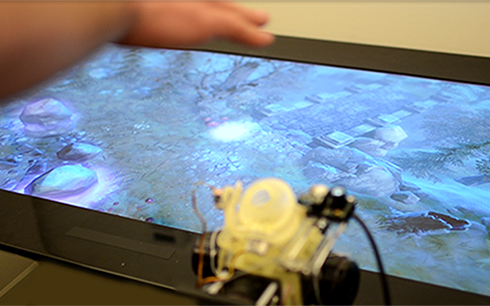 Free air sensations can be delivered to a user that map to a wide range of textures. Here a user can control a virtual character moving over textures such as water and grass. (Photo and caption credit Disney Research, see link above)

This week, however, it was the announcement that Disney Research was unveiling Aireal, which they describe as “Interactive tactile experiences in free air.” Lest that sound like a Cirque du Soleil experience, what it boils down to is that it can make you feel the impact of a virtual butterfly or a soccer ball or a hand, without needing to wear any kind of virtual reality suit. Pair it with good hologram technology like is already in use in places like The Forbidden Journey at The Wizarding World of Harry Potter, with the interactivity of digital puppets like Turtle Talk with Crush, or with other 4-D movie experiences like It’s Tough to be a Bug, and you’re 2/3 of the way to a holodeck already.It works with directional nozzles that create targeted vortexes of air (watch the video, it’s really cool), and can be paired with sensors that allow the nozzles to track the movement of a virtual object–or the user him or herself.

When my favorite anonymous source shared this with me, the first thing we said was “Wow!” and the second was “how could museums use this?”

Looking at the image above, it’s clear that providing tactile experiences of objects too fragile to touch or too expensive to recreate is one option: possibly the same scanning processes that can be used to create 3D image files for printing could be used for haptic feedback as well.  This would be fantastic for accessibility, as well as general visitor engagement. Or imagine a historic setting brought to life with projected details, like the butterfly in the video–a Jurassic era bug, for instance, or a flight simulator in the cockpit of a historic plane. Pair it with a wall of sound and get the sensation of conducting a symphony orchestra. Play a game of Mayan basketball (without the beheading). Get rained on without getting soaked. [The options for a haunted-house experience are also numerous!]

The challenge remains in deciding when and where tech is the better option, compared to a living history re-enactor or a replica or a low-tech texture panel. It seems to me that it’s the imaginative quality that is most likely to be the deciding factor (bringing to life beings that no longer exist or haven’t existed yet, creating an immersive art experience) and the conservation possibilities as a secondary factor (allowing the sensation of touch where things are too delicate for direct interaction).

How would you use a technology like this in your museum? Share your best holodeck fancy in the comments below.

For further exploration on the topic: