It’s almost Museums Advocacy Day, and soon I’ll be heading to DC for my second year of speaking up for museums, historical organizations, aquaria and zoos in the halls of Capitol Hill. 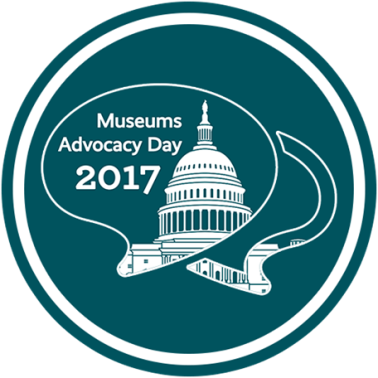 It’s exciting to know that all 50 states have museum advocates representing them this year, for the first time ever, and that there are also about 100 more advocates coming to the event this year than last. We’ll be talking about the importance of the NEA, NEH, and IMLS, of course, but museums are energized about more than funding. We’ll be talking about education, STEM initiatives, conservation and research, diversity and equality initiatives, and museum contributions to health and human services.

It’s also heartening to see that museums, which due to their preservation and conservation mindsets are often slow to act, are actively standing up for their missions, which include more than preservation: they are about education, about being welcoming community spaces, about offering the realities of the past and present up to scrutiny for the present and future. Today, for example, is the Day of Facts on Twitter (#DayofFacts), inspired by the concern raised by the stifling and disappearance of information on various government-controlled social media channels and White House webpages. Hundreds of museums, libraries, and archives are tweeting facts from their collections and expertise that are relevant to current events. This event is aimed at highlighting museums’ trustworthiness as stewards of authentic objects and experiences without being overtly political, though as the Chicago Sun Times notes, “Telling the truth is now a political act.” (Be sure to watch The Field Museum’s video linked in that article. I admit I got a little choked up, because I’m a very sensitive museum-geek.)

Other museums are also standing up in more political ways, taking a stand in opposition to the policies and statements currently coming from the White House, particularly those regarding immigration, education, and the environment. The Davis Museum at Wellesley College (Hillary Clinton’s alma mater) removed or shrouded all the objects in their museum which were made or donated by immigrants (and put their labels up for free download should other museums wish to do the same). The twitter account @MuseumsResist, with its companion for libraries @LibrariesResist, is offering up links and resources regularly for education and cultural sector professionals who want to be involved. It’s important to note that while there seems to be a groundswell right now, there are some museum professionals and museum organizations that have been participating in activism for a while, notably those associated with MuseumHue and #MuseumsRespondtoFerguson. Those folks deserve a lot of credit for leading the way and showing others in the field possible paths for discussion, response, and resistance.

And when the DC Museums Advocacy Day is over, I’ll be far from done, as Maine, Connecticut, and Massachusetts all have advocacy days for museums, the arts and humanities coming up in March, so stay tuned!