Wait…really?  Twitter, the ‘so new you have to be part of it to look cool’ mini-status-update gadget that half the world loves to hate already?  Twitter plus history equals something interesting? 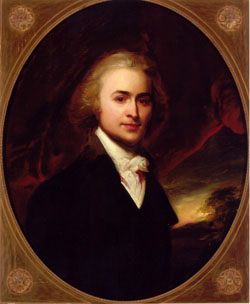 While I admit to being slightly biased about just how cool this organization is, (I worked on the interactive timeline on The Coming of the American Revolution) the Massachusetts Historical Society has gone and done something kind of fun.  This summer marks the 200th anniversary of John Quincy Adams’ voyage to Russia, to the diplomatic post appointed to him by then President Madison.  Though JQA wrote long diary entries as well, he also kept a line-a-day journal with navigational coordinates of their journey and a summary of the day’s highlights–much like today’s Facebook status updates or Twitter posts.  The MHS is doing a daily re-post of those summary entries on Twitter, and also has an overview page about the project available at their main site.

My favorite techno-gadget they’ve included is a progressive Google map tracking JQA’s progress across the Atlantic, linked from the end of most posts.

For further thought:
– What other historical figures would you love to see as a Twitterer or in some other modern guise?
– How else could you use Google maps in another context?  Historical?  To plan out the plot of a story?  Tracking sea turtles? (The New England Aquarium, another institution for which I have a positive bias, has a rehabilitation center that tracks its ‘outpatients.’)

One thought on “Putting Twitter in a Historical Context?”