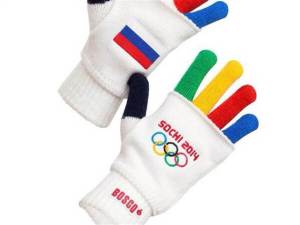 Pretty sure I had gloves just like this when I was 7, only there was a tiny knit teddy bear in a pocket instead of a Russian flag…

It’s almost time for the Winter Olympics, and time for me to find friends with working TVs so I can play too.  Before the torch reaches the Olympic stadium, however, there’s still time to work in some fun Olympics themed interdisciplinary awesome!

The folks over at The Educators’ Spin on It have compiled some fun pins about Russian language and culture to explore with younger children, and also a list of fun ways to use the three Sochi Olympics mascots (a bear, hare, and leopard) to explore Olympics history. (The mascots even have a Twitter account!)

The Australian Olympic team has provided a set of interlinked Winter Olympics lessons for several grades and disciplines.  (Despite its dubious educational benefit, my favorite is the coloring sheet featuring a kangaroo jumping out of a matryoshka, for sheer hilarity.)

From the Australian Olympic team, see link above

NBC Learn has a host of neat videos on the science and design behind the tools, gear, and execution of various winter sports.  There’s even one called ‘Olympic Movement and Robotic Design’ that I am looking forward to watching when I get a free minute.  (2010’s series of films are still available thanks to the NSF here.)

Don’t miss Olympic STEM resources from Edutopia, or this great set of history, language, and science resources for older students from Teacher Vision either.

Plus, check out past Olympics round ups from right here on Brain Popcorn:
Vancouver 2010: Warming up for the Winter Olympics
Sliding, Rolling, and Gliding (Bobsleds and more!)

One thought on “Rushin’ towards the Olympics”