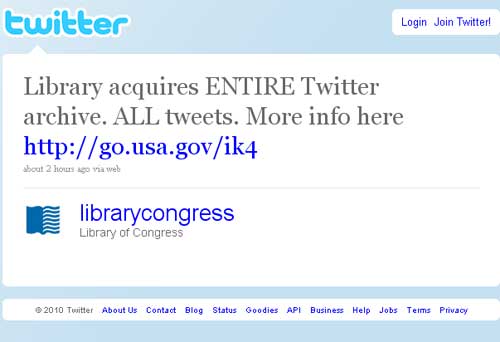 Last summer I wrote about how the Massachusetts Historical Society was using Twitter to re-broadcast the daily ‘tweets’ of John Quincy Adams.  (A project which is ongoing, by the way, and still fun to find out the daily activities of this long ago Bostonian and former US President.)  And in that post, I asked “What other historical figures would you love to see as a Twitterer or in some other modern guise?” (I’d love to hear the brain-poppings of Thomas Jefferson, JRR Tolkien, or Thomas Edison, to name just a few.  “Dang! Have now invented 64th way not to build lightbulb.  Must purchase more filament tomorrow.”)  The folks at the Paul Revere House have taken up the challenge  and tweet regularly as the Midnight Rider himself at @PaulRevere1734.  And for the ironic, sad, amusing, and historically inaccurate, check out Historical Tweets: @johannesG: Finally finished invention. Disappointed to learn that no one can read. (Johnnes Gutenberg, inventor of the Gutenberg Press)

However, it now turns out that future generations will be able to find out what was on the mind of folks around the world and up and down the spectrum of celebrity — from the online and backstage shenanigans of rock stars and actors to the mundane details of what you and I thought about the recent spate of natural and manmade disasters.  Late last week, The Washington Post reported that the Library of Congress is going to be archiving all of Twitter’s public tweets, on a six-month lag (to separate ‘history’ from ‘current events.’)  Though some people are naturally skeptical (and uninterested in what Al from Boise had for lunch when he visited San Francisco on a business trip), others point out that hearing people’s off-the-cuff responses, finding out what interests them at a particular time, or evidence of casual correspondence between public figures is a historical goldmine.

Also mentioned in the article is also the benefit to populist history: taking the archives and sifting through the hashtags, etc, future historians could in fact get a real picture* of societal values and interests in an increasingly fractured “information age.”  I once heard historian and author David McCullough speak, and was incredibly struck by his statement that though we live in an age which is ‘information rich,’ future historians could easily find it ‘information poor,’ especially if and when digital records are lost.  Who writes letters by hand?  Who keeps a steady handwritten journal?  he asked.  What possible tools will the future students of the past have to understand an age where newspapers begin to disappear and half our life is lived by email?  Though it does  not solve the digital-record-dilemma, perhaps the Library of Congress Twitter archive is one way to answer his–and history’s–concerns.

*And by “real,” the article and I would both like to point out, we mean “the sections of society which are aware of and interested in a communication medium like Twitter.”  All historical sources have their context and limitations, after all!